In Islam, the pagan association of the star Sirius is stripped away as the Qur'an proclaims Allah to be the ''Lord of Sirius'' Surah an-Najm: 49 thus emphasizing the dominance and superiority of Islam over the old pagan religions of Arabia.

Faced with limited supplies of water and the harsh living conditions of the arid regions in which they endured, the pre-Islamic Bedouin people lived minimalistic lifestyles that were easily transported to wherever they could find new resources for their survival.

Many of the physical descriptions of the pre-Islamic gods are traced to idols, especially near the Kaaba, which is believed to have contained up to of them. The name of the goddess means ''to change fortunes '' and ''to avert''. Because of the harsh climate and the seasonal migrations required to obtain resources, the Bedouin nomadic tribes generally raised sheep, goats, and camels.

The Book of Idols describes gods and rites of Arabian religion, but criticizes the idolatry of pre-Islamic religion.

The longstanding enmity between the Aus and Khazraj tribes was dampened as many tribe members, and some local Jews, embraced Islam. Yathrib was dominated by Jewish tribes until around CE, when several Arab tribes gained political power.

The Semitic belief in mountain deities and mountains being sacred ground is comparable to the ancient Hebrew veneration of Mount Sinai, where Moses received the Ten Commandments and the covenant from Yahweh. Marriage In pre-Islamic Arabian culture, women had little control over their marriages and were rarely allowed to divorce their husbands. 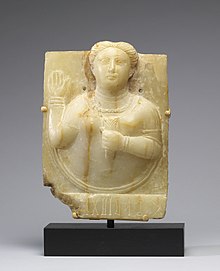 Often times, worshippers would create stone idols to represent the divine beings which were most important to them. Amulets in the shape of crescent moons were worn to gain the influence by and protection of the moon god by many Semitic cultures.

In CE, Muhammad and around 70 Meccan Muhajirun believers left Mecca for sanctuary in Yathrib, an event that transformed the religious and political landscape of the city completely.

Dhu'l-Samawi had his equivalent in the pantheon of the Palmyrenes of southern Syria, where was known as Ba'l-Samayn or Balshamin; a sky god who was similar to the Greek deity Zeus.